This marina and area is a sport fishing boat destination. Most boats are high helms with downriggers and fishers everywhere. With this weather we did not see many go outside onto the Atlantic Ocean. Most stayed in their slips. We are here too as we ride out 28+ knot winds for days. The winds are from the NE and E and as we are now on the ICW and on the west side of the ICW we don’t feel too much wind. This marina is very protected. There is a pool, hottub, pump out at all slips, diesel at all slips (how about that folks) and good docks with pelican poles. The tide is about 3 feet so sometimes getting on and off is a challenge. On the flip side there is a ladder at the slips for ease. The water is super clear. We like it here so much that we ask about a week long stay.

There is a beach within walking/biking distance, another sand low tide island that has boats on it permanently that sit on the sand during low tide. The beach area is a snorkel spot where we spent some time exploring the manmade reef. It is still in its infancy but the waters are calm, fish are abundant and it is only 5 minutes away. Pickleball……………..yes there is pickleball. A really nice club that we take Otter to and leave her on the beach. The tide rolled in on one of those NE blows and brought in more water with a seiche so we decided to bike it next few times. It is a half hour bike ride so a good warm up. Great games divided into groups according to skill level. We went 3x. Scott was able to play with some 5.0 players as the Championships are being played in Naples starting the day we leave. Over 3000 candidates on 62 courts over the course of 8 days.

We also did a grocery run by bike after Scott picked up a set of saddle bags for his bike. That helped a lot with not having to carry the heavy items in a backpack. We wandered down to Riviera Beach and watched some 2 man beach volleyball and grabbed an ice cream. There was also boat maintenance to do. Another scrub of the hull with the Snuba System and her running gear is new again. Scott says the bottom looks really good. While he was cleaning the bottom there was a barracuda under our neighbour’s boat the same size as Scott. Each was watching the other even though the barracuda really couldn’t care less about having a diver in with him. Our Canadian Flag has seen some wear and tear so I took it down and sewed the seams back together. Now she looks almost good as new. Our Dalhousie Yacht Club Flag is in dire straits. We aren’t sure if is is going to make it but we promised to not take it down. It has traveled with us the entire way and will stay that way as long as it holds on.

After being here a week the winds are more in our favour. We will be more protected on the ICW (Intracoastal Waterway) so we will head out tomorrow on our first real trek home. It will be familiar territory the latter part of the day as we had been here in 2017. 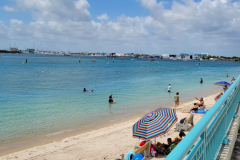 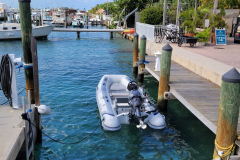 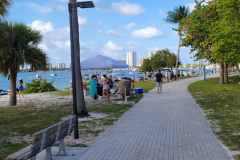 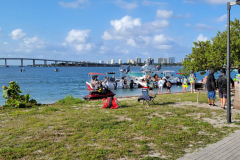 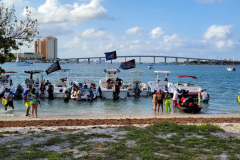 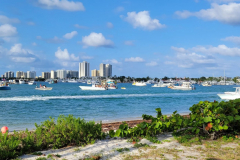 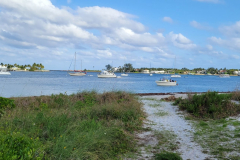 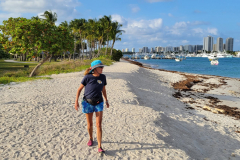 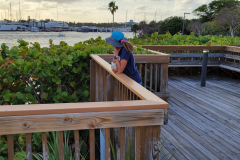 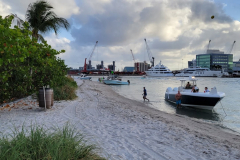 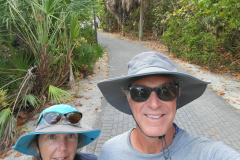 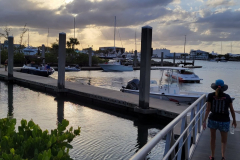 This Blog was designed for two purposes: